If you’re like me (that is, employed by an ad tech company), stream processing is usually associated with frameworks like Storm, Flink, Spark Streaming, and other such solutions. However, a lot of real-life software can be described as stream processing – data comes in one end, is transformed or aggregated, and goes somewhere else. Many of these workloads don’t justify the overhead of a stream processor, but that doesn’t mean they can’t benefit from some of the lessons of stream processing systems.

In this article I’ll be going into detail of a small-scale stream-processing architecture for Clojure, built around the core.async and component libraries. This architecture allows us to build modular components connected entirely by asynchronous queues, allowing for very flexible systems. The lessons herein can also be broadly applied to other coroutine systems in other languages, such as Go and Kotlin.

Existing stream-processing architectures concern themselves extensively with problems that arise from distributed computing: ensuring that datapoints are processed at least/exactly once and generally handling the distribution of datapoints to nodes and processes within them. Most such systems promote a similar architecture, wherein you are reponsible for defining components to transform incoming datapoints, which match the system’s API regarding incoming and outgoing data, and with assembling those components into your final system.

The basic principles of designing a system based on stream-based CSP are quite similar; you have various processes, which are connected to each other via channels, which act as queues. Even if we’re not writing a distributed system, approaching a streaming-data system from this angle can provide us some benefits. Specifically, we will be forced to develop reusable components which are loosely coupled (in this case, via core.async channels).

Later, if we want to make design changes – a simple example would be adding persistent queues between components – we can completely reuse the existing components, and need only adapt the external service to a core.async channel.

Clojure’s core.async is inspired by Go’s Concurrent Sequential Processing features. It allows you to structure your program as a serious of asynchronous state machines, which can logically block waiting for each other without holding a thread while they do it. This is called parking, and it can help simplify highly-concurrent workloads substantially. I’ll be quickly reviewing Clojure’s implementation here, but if you’re not familiar with the subject, Brave Clojure has a great primer you should read.

The basic unit of a core.async workflow is a channel. A channel behaves like a queue – items can be put to it, or taken to it, and will retain the order that they were placed on the queue. Outside of a go block, you can asynchronously (with a callback) put! to or take! from a channel, or you can synchronously (blocking a thread) put (>!!) or take (<!!) from it:

To use the “parking” feature, you can use the go macro, wherein the parking put >! and take <! can be used:

The go macro will, effectively, rewrite its contents into an event-driven state machine, allowing channel operations to wait for responses without holding up a thread. A single machine can easily handle thousands (or more) of parking operations (and therefore go blocks) simultaneously. The contents of a go block are sometimes said to be run in an “Inversion of Control” (IOC) thread.

Channels can be closed; takes on closed channels will return the contents of the buffer until it is empty and nil thereafter (NB that nils cannot be placed on a channel on purpose, and therefore always signify a closed channel). Puts to closed channels will complete immediately and cause >!! and friends to return false, signifying that the put failed.

By default, channels are unbuffered, and attempts to put to a channel will block until some other process is ready to take from it. This is an extremely useful property, since it allows us to build in back-pressure. However, sometimes it can be useful to have channels store message – this allows processes putting to those channels to proceed without waiting for the message to be taken.

A fixed buffer of size n will allow n items to be put to the channel and stored. If the buffer is full, puts will block. If you don’t mind losing some messages and want to make sure your source process can continue unimpeded, you have your choice of sliding or dropping buffers.

A sliding buffer, when full, will remove the least recent message (i.e. the next message that would be taken from the channel): 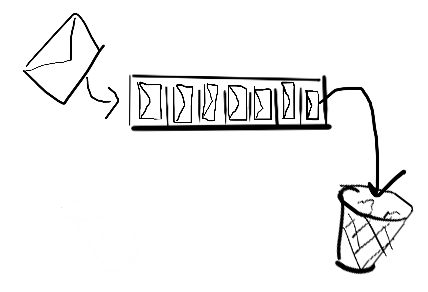 A dropping buffer will allow puts when full, but discard the message: 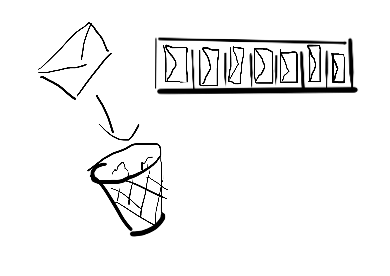 Here’s how to create channels with different buffer types

Transducers are a utility devised to generalize collection operations. There is a lot to know about transducers, but for our purposes, what you need to know is that channels can be created with attached transducers, which means that their content will be transformed automatically as it passes through the channel:

Since transducers can be applied generally, to collections as well as channels (try (eduction xform ["hello"])), they are easy to write and test.

It’s straightforward to pipe one channel to another:

Many-to-one many-to-one channels are easy enough; just put to a channel from one or more sources (or use merge).

Sometimes, however, you will have more than one process consuming from the same input stream. In this case, you can use core.async’s built-in mult/tap functionality.

You can use mult to create a mult – that is, a quasi-channel that can be consumed by more than one consumer. Every mult has a single backing channel; writes to that channel will be distributed synchronously to all taps. When using mult, remember that no other process should consume from the backing channel – otherwise you’ll have a read race and the mult may not receive other messages.

To add a consumer to a mult, use tap:

Other solutions for multiple-channel designs are pub and mix; you can read more about these in the docs.

The basic principles of designing a system based on stream-based CSP are quite simple; you have various processes, which are connected to each other via channels, which act as basic queues.

How work is divided between the processes can be important; as a rule, remember that go blocks are cheap but not free.

Unless you have extremely good luck, the entry and exit points of your pipeline will not be native core.async channels, and so you’ll have write your own adapter. The following function will open a file and put the contents into a channel that it returns.

Most of your intermediate processes will use go-loop to consume indefinitely from a channel. I’ve found that this basic pattern is generally useful:

Writing components that map or filter components is straightforward, using the above pattern:

However, you should generally prefer to express mapping and filtering operations as transducers for the sake of resource use and brevity. If necessary, you can use pipe to help with this:

Aggregations are necessarily stateful, so we’ll need a way to store that state. An easy way to do this is to update that state via go-loop:

To manage all those channels and processes, I’ve found it helpful to use Components. Component components describe long-running processes with resources that must be opened and closed, which accurately describes typical go loops and channels. Actually, I’ve found it helpful to use Component to structure most Clojure software I write; the restrictions imposed by this design tend to guide me towards writing more general components and less interconnected and coupled systems.

Components are plain clojure records that implement Lifecycle. Use the record fields to store configuration, references to provided components and/or resources that must be opened, exposed, and closed.

In this case, our components will consist of a channel plus a process. The components will store channel references, and other channels that depend on them can take from those channels and use them in their own processing.

Note the reuse of the line-chan function from earlier. This is actually the only service that requires closing; consumers are written such that their channels will close when the input channel is closed.

Also, if this is starting to smell like an overengineered word count example, you’re completely right. Here are the other components (both of the xform type, as above):

Once defined, these components can be assembled into a system that can be started and stopped as a whole:

For debugging: the system map can be stored and the word-count output channel accessed to get the results.

I have several applications presently running on this general architecture, and I’ve been surprised at just how rock-solid they’ve been.

I think my favorite thing about this design is the ease with which it can be remixed, refactored, and repurposed. Components can be changed and rewritten without requiring major changes to other parts of your program.

Since core.async channels are such a general tool, it’s also easy to adapt the channels connecting the components to add additional capabilities. To name one example: Kinsky is a Kafka library that provides a core.async channel interface; you barely have to change a thing to add a persistent, distributed, ultra-high-throughput message log to your system.

That’s it! I hope you learned something!